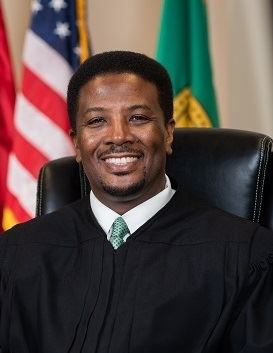 Prior to his election, he was recommended and endorsed by his predecessor Judge Larry E. Potter, who assisted in creating the Shelby County Environmental Court and served as Judge for over 35 years. Before serving on the bench, Judge Dandridge worked to address blight and other environmental concerns for the City of Memphis for over 18 years. He served as the City of Memphis Assistant City Attorney for 15 years and most recently as the Director of the City of Memphis Code Enforcement Department from January 2016 – April 2018.
​
​ Judge Dandridge was born and raised in Memphis, Tennessee, and is a 1983 graduate of Central High School. He earned his Bachelor of Arts degree in Government from Georgetown University in 1987 and his Juris Doctorate degree from Georgetown University Law Center in 1991. Judge Dandridge also earned his Masters of Business Administration degree from Christian Brothers University in 2012.
​
​ Judge Dandridge is a member of the Memphis Bar Association, Tennessee Bar Association and National Bar Association, Ben Jones Chapter. Judge Dandridge is licensed to practice law in both the states of Tennessee and Pennsylvania.
​
​ Judge Dandridge has a demonstrated passion for our community and the environment.