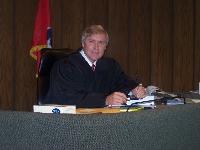 Jim Lammey was elected to Criminal Court, Division 5 in August 2006 and is currently serving in that position.

Judge Lammey was raised in the Whitehaven area where he attended Bishop Byrne High School. He graduated from Southaven High School in 1975 and from Ole Miss in 1980 with a degree in Civil Engineering.

Judge Lammey worked in Louisiana for five years in the oil and gas production business. He designed, installed, serviced and sold production equipment.

In the late 1980’s Judge Lammey returned to Memphis to attend law school. He graduated from law school at the University of Memphis in 1989 and thereafter served as an Assistant District Attorney for over 16 years. As an Assistant District Attorney, Judge Lammey served in the Major Violators Unit, the Violent Crimes Prosecution Unit and as a Division Leader responsible for supervising personnel and cases in Criminal Court. His primary responsibility was the prosecution of homicides.

Judge Lammey and his wife have been married for 23 years and are the parents of four wonderful children.